The Bed Bug Infestations have NEVER been worse, bed bugs are out of control, so our Bed Bug Franchise Business has never been better!

Bed Bug infestations across North America have grown by 500% in five years and are found in every type of living space from houses to hospitals, colleges to cruise ships – there is a Bed Bug Epidemic and we have a Different Kind of Bed Bug Franchise to help control it! (Source: Congressional Study – Don’t Let The Bed Bugs Bite Act of 2009) 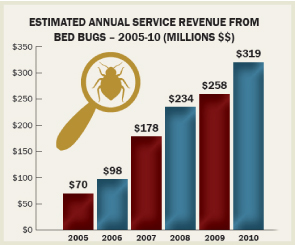 In 2010, the bed bug business generated an estimated $317,000,000! The bed bug services industry has averaged 25% yearly growth since 2006 and is expected to continue at that rate for the foreseeable future (Source: Pest Control Technology, December 2011). These charts of Estimated Annual Service Revenue from bed bugs shows the growth of the industry over the last few years and how it breaks down nationwide.

Why is the bed bug problem growing so quickly?

The answer is easy: the bed bug population has exploded! Most people don’t realize when they have a few bed bugs. They are then left untreated and a single pregnant female can easily become an infestation of over 13,000 in only 6 months – that is a Bed Bug Infestation!

And now, thanks to increased world travel, bed bugs have also come from countries that continue to use DDT. Studies have shown these bed bugs are growing increasingly resistant to all forms of commercial insecticides. Researchers agree there is no miracle chemical on the horizon that will curb the spread of bed bugs. Convective heat remediation is the least intrusive, least time consuming and most cost effective way to kill 100% of bed bugs, nymphs & eggs in a single treatment. This means a golden opportunity for the BedBug Chasers heat system!

The BedBug Chaser proprietary heater quickly turns any room into a supercharged convection oven, killing every bed bug, nymph and egg in a single treatment.

As a heat remediation specialist, you will offer your customers 100% kill results using zero chemicals, with no odors, minimal preparation, minimal clean-up, and you will be able to offer prices no other pest control company can match because you will only need a SINGLE VISIT! Currently, convective heat remediation currently represents less than 10% of dollars spent on bed bug services. It has the greatest potential for growth of any sector in the market.